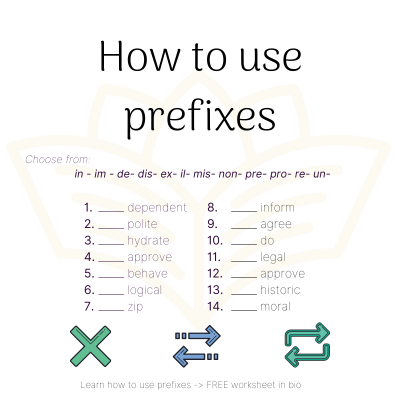 A prefix is a group of letters added to the beginning of a word. Prefixes modify the meaning of a word. They can make a word negative, show repetition, or indicate opinion.

The word “unhappy” uses the prefix “un-” (which means “not”). The prefix in this case changes the word ‘happy’ into the opposite “not happy.”

So, how do we use prefixes?

"un" - against, not, opposite
(used for verbs, nouns, adjectives, adverbs)
undo, unequal, unusual

"dis" - not, opposite, reverse, away
(verbs, nouns, adjectives and adverbs)
disagree, disappear

Suffixes are often used to show the part of speech of a word. Think of adding "ion" to a verb as "tense" which then makes it "tension," the noun form of the word.

Suffixes also show us the verb tense of words or whether the words are plural or singular.

Some suffixes have more than one meaning. “er” may suggest a person who performs an action, like a teacher.
"er" is also used to make adjectives and adverbs, they then become comparatives - for example ""faster" and "stronger."

When you add a suffix to a word, often the spelling of the original word stays the same, but sometimes they do change.
For example: if the original word is one syllable and ends with a single consonant, we double the last letter.
For example: run = running, tip = tipped.
If the word ends in more than one consonant, for example talk = talked, the last letter doesn’t get doubled.

The spelling of a base word can change when you add a suffix.
Think of words ending in the letter "y” when we want to add the suffix –ness: "crazy" - "craziness," we replace the "y" with an "i "

Or words ending in a silent "e" when the suffix begins with a vowel. For example, "date," "fade" and "imagine," we drop the "e" in the words when we add -ing to make: "dating," "fading" and "imagining."

We also often, but certainly not always drop the silent "e" before the suffix -able such as in "advisable” or “inflatable”, but not in "changeable" and "loveable."

We sometimes double the consonant when the ending is added for example in “forgettable” or “regrettable”.

Prefix + hyphen
use a hyphen...

1.     when joining a prefix to a proper noun (single entity such as names of people, cities and planets).
For example: pro-American, un-British, pro-Nazi

2.     after the prefix self-
For example: self-esteem, self-aware

3.     after the prefix ex- when it means former
For example: ex-husband, ex-colleague

4.     to prevent misreading, mispronunciation, or confusion with other words.
For example
re-cover (to cover again) to avoid confusing it with recover (to repair)
re-press (print again), not to be confused with repress (subdue with force)

Using 'wish' in a sentence

One thought on “How to use prefixes”