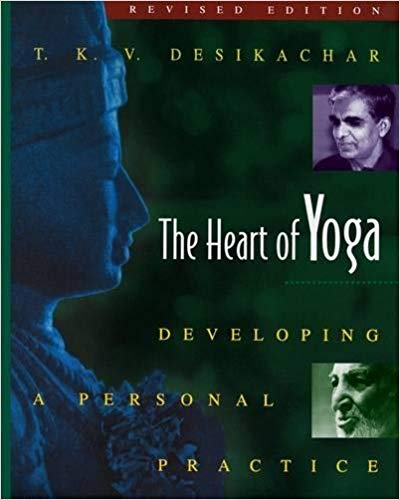 Thoughts and philosophies by (Sri) T. K. V. Desikachar, an inspirational and exceptional yoga teacher, on yoga. The book displays the significance of his schooling, the importance of having a knowledgeable teacher and the eternal studies on these beliefs, or conviction.
T. K. V. Desikachar grew up as son of Sri Krishnamacharya. A Sanskrit scholar, healer, and yogi who was among others schooled in Samkhya, India’s oldest philosophical system on which Yoga fundamentally is based. It states the establishment of the Krishnamacharya Yoga Mandiram institution (1976), a foundation in which yoga is used to treat sick people, applying Ayurveda medicine and yoga as healing agents.
Most prominently, the book will hand answers to the many questions in your beginning yoga journey, including the different stages, various phases, viewpoints and perspectives, results and consequences of a (un-)regular practise.

The Heart of Yoga defines the diverse understanding of the yogic philosophy. Attempting a constant, present state of mind. “To be one with the divine”, “to come together,” “to unite”, “to attain what was previously unattainable”.  As I’d interpret: union of body, mind, soul or spirit. Being present, observant and acceptant, making way for Samadhi, “complete integration with the object to be understood” and Nirodha, “total clearance”.

Despite being the offspring of a more traditional yoga practioner, (Sri) T. K. V. Desikacha displays his teaching techniques and passes on his modern and technical appreciation of this centuries old tradition, coming as close as possible to a complete understanding of yoga as a lifestyle.

Accessibility & (personal) approach
Yoga does not know any limits, no target group, and no one way of ‘doing it right’. It is available to everyone alive. If you can breathe, you can practise. That does not mean that you should practise any kind of yoga. “It has to be the right yoga for each person”. Knowing what is right for each person, is the responsibility of the teacher through teaching only that what is truly relevant to the student.
There is not one approach, treatment, or solution that is right for “every-body”. Yoga objects the mind, and every ‘mind’ is unique. It is the only thing we all have in common; distinction.

In modern yoga, where we dominantly practise asana in groups, this personal approach can be achieved by a simple touch of assistance, or a sweet word. By getting to know and observing your students, making (eye-)contact, and trying to find their needs, either mentally or physically. To be clear about what asana you are teaching, and how to prepare for it to avoid distress, injuries, or frustration.

Importance of the breath
One of the most essential part of each yoga practise is the breath. Each movement, each pose, even each thought, originates or is assisted by our breathing. Without our breath, we are nothing; it is the sign of life.

“This balanced union brings harmony and order to our bodies and minds”.

As each day is different, we are not the same person as we were yesterday. We do not move the same as we did last week. No better, no worse, different. Therefore, it is necessary to practise your asanas without judgement. Our breath is the measurement of a valued practise. If we fail to maintain a calm, stable, quietly sounded breath, we have pushed ourselves too far. The quality of the breath is the strongest indication of the quality of our asana practise.

Yoga to impress
When practising yoga, we are not performing a show, we are not aiming to entertain anyone, and certainly not trying to impress others by embellishing the Internet or adorning Instagram. Each practise is as personal and unique as we are ourselves, and that is special enough. We should not need competitions.

That aside, remaining flexible, being able to change expectations, paying more attention to the spirit in which we act and focussing less on the direct results, our actions may bring progress in our overall yoga practise.

“Get rid of dukha and avidya, and make room for purusa”.

Every action has a positive and a negative effect. In yoga asana, but certainly in life. Being able to identify which effects are positive and which are negative is extremely important to balance out your actions and choices. In yoga asana, we need neutralizing postures, or counter poses (pratikriyasana) to optimize the body. Knowing your body, they often come automatically. With time, you will know what your body needs.
In life, this means we need to become more aware of this action-reaction effect and think through our choices thoroughly. Make ourselves conscious of the outcome, the consequences in the short and the long run. Listen to our needs mentally, physically and emotionally. As I often take things as they come and adapt to it. Learning that we have a bigger say in these results, can change your perspective.

“It is precisely those who are searching for clarity who often experience duhkha particularly strongly”.

During my teacher training we focussed a lot on the Self. ‘Where am I? Who am I? What am I?’.

Chapter 8 “Things That Darken the Heart”, took me back to these therapy-like sessions, in which we got scarily close to getting to know our true, inner-selves.
The four types of avidya: asmita (ego), raga (desire), dvesa (hatred), adhinivesa (fear), are always present, and always will be. The volume of their existence and the impact of it in our life, is our own responsibility. Yoga asana, pranayama, and meditation, together with conscious time for reflection, can and if practised regularly, will help you control these emotions or even eliminate them. Striving for the ultimate; wanting, or controlling something, trying too hard to have something, will result in the opposite effect (duhkha) of your desire.

‘living yoga’ has a unique meaning for every individual.

The eight limbs; yama, niyama, asana, pranayama, pratyahara, dharana, dhyana, samadhi, and five states of yoga; ksipta, mudha, viksipta, nirodha as described in the book caught my serious interest. All terms of which I had heard before, but never came to visualize the meanings of so clearly. Recognizing and now being able to name these common states and behaviours we see daily, and the realization hereof is truly intriguing and would be something we mankind, should create more awareness around.

In our world now, it can be seen hard to let go and ‘live yoga’, but ‘living yoga’ has a unique meaning for every individual. To me this means letting go and care less, or not care at all about what people think. Obviously, without hurting anyone in any way, but little by little let myself be less influenced. I am not striving for samadhi (complete integration with the object to be understood), neither nirodha (total clearance), which effectively go together. I am not seeking for the ‘oneness’, as a ‘real’ yogi or yogini may would. However, I am searching for solutions, willing to see mistakes and rectify faulty perceptions and have opened up for new and further discoveries. Being me now, I think it is only fair to sometimes be stressed, feel hurt, be upset or the total opposite. To me, yoga means being who you are in the present moment, without drowning in emotions, or seeking stimulants to make you feel better. To practise a change in the quality of the mind, so that we can live more balanced and unaffected.

The Eight Limbs
Of Yoga

The Yamas and Niyamas